A Look at the Design of the New Google AdWords Interface.

We asked Faranaaz Vraagom, Campaign Manager at Conversion Science, to describe her experiences and this cloud has a silver lining after all.

We are creatures of habit, thus, we become accustomed to doing things in a certain way and enjoy the attendant routine and predictability. This is certainly true for myself and any change to my routine elicits some degree of anxiety. When I was confronted by the new AdWords interface, I scanned over it for 5 seconds and decided that I disliked the layout from the onset and switched back to the old interface.

Not only was this new interface more colourful but everything was not where it was supposed to be! It felt like I had to learn the AdWords layout all over again and this transported me back to my first months at Conversion Science when I was a naïve but excited Intern ready to conquer the PPC world. Mwahaha! 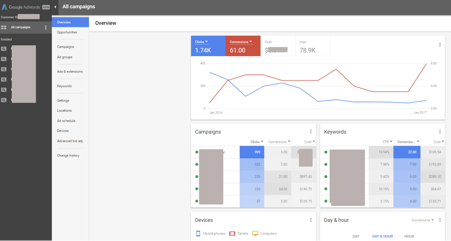 As mentioned, I looked at the new interface (with more than a little chagrin) and clicked the three little dots in the top right-hand corner with relief. I reasoned that that odd comfort zone of finding everything in its right Google-given place, would infuse my campaign management with efficiency. It was all a bit “Who Moved My Cheese?”

After weeks of ignoring the nemeses-interface, a colleague of mine spoke about some of the new features that were introduced. He enthused about the new features provided and the insights we could draw from this.   He added that, embracing such a change would be critical to a more intimate understanding of campaigns. And, this would provide new opportunities for campaign optimization. My curiosity was piqued. I plucked up the courage and ventured into the unknown…

What did I discover? I found that my reluctance to embrace change had stopped me from utilising a whole new set of features that would have helped me to improve campaign performance.

I am not suggesting that an acceptance of the interface will magically quadruple your conversions or increase revenue by 100% but it will, over time improve key metrics such as CTR, User-Experience and invariably Conversion Rates.

The two key features that I would like to highlight below are Promotion Extensions and Landing Pages insights.

This is a new ad extension that is exclusively available in the new interface. These extensions can be used to advertise specific offers that you are running on your site and link to the landing page containing the offer. What is great about these promotion offers is that you can use them for FOMO-type campaigns and to derive a few of the benefits of a Shopping Ad in a normal Search Ad.  It is more invaluable real estate.  These tools add a little spice and an inevitable countdown to mark the client’s USPs.

It is the latter strategy that I employed for one of our clients whose USP is a percentage discount on their delivery service. When analysing one of the campaigns for a period of a month, the Promotion Extension I used, had the highest CTR compared to the other ad extensions in the campaign. It also had the second highest number of conversions and second best performing CPA. Although it’s a small sample size we are working with, the initial results are encouraging.

Going forward, Promotion Extensions will be something that I will utilize wherever possible. It clearly adds value to campaigns and promoting discount offers is especially important in the South African market, where price points are a major consideration for online shoppers1

The second new feature that I would like to highlight is the new Landing Pages tab. In the previous AdWords experience, we had some insights into the performance of our landing pages when analysing Quality Scores of keywords. However, with the new Landing Pages tab, AdWords has enhanced the feature and now drills deeper down into landing page experience in relation to device type. Now you can see which landing pages are mobile friendly and which ones are not. This is particularly important in the South African market, where access to Desktops and Wi-Fi is limited. Mobile devices then become a primary means for a large majority of people to access the internet.

The 2017 Effective Measure Survey of the e-Commerce industry shows that 27% of people shop in-store online while using their Mobile devices and it is expected that this number will increase in the years to come. Therefore, it is important for e-Commerce sites to be cognisant of this growing segment of online shopping behaviours and tailor their product and website accordingly. This increase in mobile shoppers is evident in one of our new campaigns, where “Mobile” has brought in more conversions than either “Computer” or “Tablet” in the first month. For this client, we have gleaned that a substantial portion of their customers seems to use Mobile devices to shop. And in so doing, we can feed back to client when they need to make changes to their site or optimise for device type.

In conclusion, I hope that I’ve provided some useful insights as to how one can utilise some of the aspects of the new AdWords interface to optimise campaigns and improve performance. There are still many new features that I need to discover and learn about but I am certain that they will prove beneficial to my campaigns in some way.

We are sometimes resistant to change because we have come to expect things to be a certain way – there is security in this and it is intrinsically human. Nonetheless, with most positive, innovative changes, fresh possibilities and opportunities abound.

This is certainly true for the new AdWords interface. After the initial frustration with the new layout and navigation, I have seen the light and have come to embrace the re-invented AdWords interface and all its innovative features.

That is until Google reshuffles the cheese-board again……

Conversion Science has been named a 2022 Google Premier Partner

Are you Busy with your Digital Marketing Strategy for 2022?

Are you considering your digital marketing plan of attack for the year ahead? As we head into 2022, you’re probably starting to think about your marketing plans, along with how your business can best reach the growing masses of online customers. And if the above...

To say that we are all racing 2021 to the finish line would probably be putting it lightly, but that doesn’t mean we can’t look at 2022 with excitement and anticipation, and enter the new year stronger, more resilient and more prepared than ever before, and this means...

Did you know? Google drives 95% of your paid search ad clicks on mobile. The widely used search engine gravitates towards mobile like a mouse to cheese, which is why, as a company, it’s not a luxury to have a responsive website that is mobile-optimized, it’s a...

The benefits of Google Analytics 360

Businesses across the world are finding that the benefits of Google Analytics 360 outweigh the initial time and capital investment. As with any premier service, there is a fee to upgrade from the standard (free) version to the full suite and thus, many enterprises in...

So goes the tale; Fourth Industrial Revolution (4IR), Big Data, Artificial Intelligence (AI), Machine Learning (ML). From the public to the private sector, these have formed part of the whirlwind that has indicated that a company or industry is clued-in on the future....

Conversion Science announced today that they have been selected as Google Marketing Platform Partner and has received certification for Analytics 360, making them one of a handful Premium Google Partners to achieve this status in South Africa. Conversion Science is a...

If You’re Not Advertising On Twitter, You Should Be!

Twitter is known as a social platform, a news service, or even a miniature blog. But how many businesses regard it as being a powerful marketing resource? Twitter is the perfect medium to spread the digital word about your brand. With over 500 million Tweets created...

Smart Shopping was introduced by Google in 2018 signifying another step towards automated and machine-learning focused advertising. Tested and developed under the universal shopping beta banner, this new feature made its debut in Google’s goal-optimised portfolio on...

We spotted it on the AdWords Editor on the 1st of May. Now, the In-Market Audience Feature can be accessed for Search purposes. This is a valuable opportunity for Advertisers to connect with consumers at the critical moment of a decision to purchase. In 2017, Google...

Google began rolling out the Smart Campaign feature to advertisers on the 20th of April 2018.  With Over 3 Million Websites and Apps on the GDN, advertisers have traditionally been provided with ample opportunity to reach audiences with relevant messages and augment...

101 on Google Shopping in Preparation for the Retail Season by Dominic Bowers (CM at Conversion Science) Oct 05th, 2017 We’ve come a long way since Craig Neville Manning introduced his model for the Google Product Search in 2002.  In 2012 this GPS evolved into the...